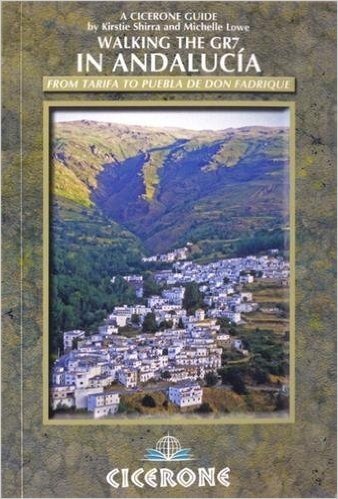 Walking the GR7 in Andalucia

Comprehensive guidebook to walking the GR7 through Andalucia in southern Spain. This wonderfully varied route starts at the southernmost tip of Spain on the coast at Tarifa, and meanders through the provinces of Cadiz and Malaga before dividing. The northern fork heads through Cordoba and Jaen provinces (718km, 34 to 41 days in total), while the southern fork passes through Almeria and Granada (735km, 35 to 42 days). Both routes finish at Puebla de don Fadrique. The fully waymarked route crosses seven stunning natural parks and the Sierra Nevada national park, home to mainland Spain's highest peak - Mulhacen. All the information needed to plan a trek is included here. Stage maps use official IGN mapping. Detailed route descriptions are given for around 60 days of walking, with options for creating shorter sections and days. The GR7 avoids tarmac roads wherever possible, instead taking ancient trade routes, bridlepaths and even goat tracks, there are only a few sections of steep ascent, so this route is suitable for walkers of reasonable fitness and navigational ability.

Walking the GR7 in Andalucia